Disaster is a sudden, calamitous and unfortunate event that brings with it great damage, loss, destruction and devastation to human life as well as property and also hampers the ongoing developmental projects in a particular area being affected by the disaster. Disaster has been defined in many ways; World Health Organization has defined disaster as any sudden occurrence of the events that causes damage, ecological disruption, loss of human life, deterioration of health and health services, on a scale sufficient to warrant an extraordinary response from outside the affected community or area. Disaster management is very important to survive in the case of a natural or a major man-made disaster and can be defined as the organization and management of resources and responsibilities for dealing with all humanitarian aspects of emergencies, in particular preparedness, response and recovery in order to lessen the impact of a sudden disaster.

The damage caused by disasters is immeasurable and varies with the geographical location, climate and the type of the earth surface/degree of vulnerability. At times there can be disasters where there is no loss of human life and at times these can also cause a huge loss of life and property. This influences the mental, socio-economic, political and cultural state of the affected area. A disaster can be caused by human activities or due to some natural changes. Disasters are events that are unpredictable most of the times. It is important for any government, state or community to manage disasters by being prepared for it in advance. Government provides legislation, allocates resources and does rational planning and sustainable development. Disaster management and planning is a key part of government work and an issue to be taken up seriously by the concerned authorities. 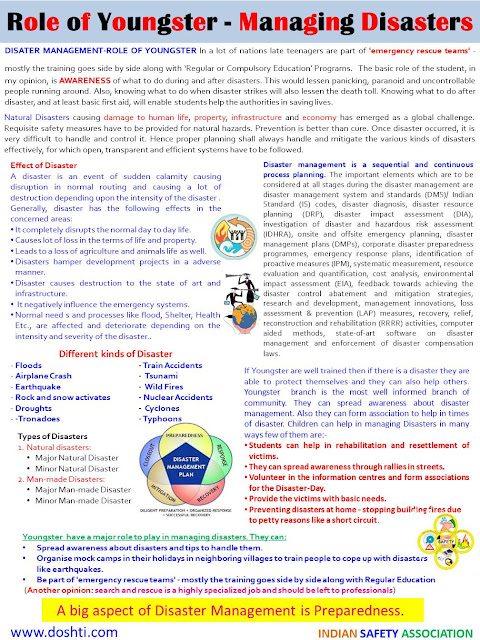 Effects of Disaster
A disaster is an event of sudden calamity causing disruption in normal routing and causing a lot of destruction depending upon the intensity of the disaster. Generally, disaster has the following effects in the concerned areas:
•       It completely disrupts the normal day to day life.
•       Causes lot of loss in the terms of life and property.
•       Leads to a loss of agriculture and animals life as well.
•       Disasters hamper development projects in a adverse manner.
•       Disaster causes destruction to the state of art and infrastructure.
•       It negatively influence the emergency systems.
•       Normal need s and processes like flood, Shelter, Health Etc., are affected and deteriorate depending on the intensity and severity of the disaster.

Natural disasters:
Natural disasters are generally unpredictable types of disasters and the destruction caused by these depends upon the intensity of the disasters. These disasters include floods, hurricanes, earthquakes and volcano eruptions that can have immediate impacts on human health, as well as secondary impacts causing further death and suffering from floods causing landslides, earthquakes resulting in fires, tsunamis causing widespread flooding and typhoons sinking ferries. Majorly the cause of these disasters is the change in climate as well as the movements inside the earth like moving of tectonic plates or lava. Depending upon the intensity as well as the destruction caused these can be classified as:

Major Natural Disaster:
Major natural disasters include the events of high intensity earthquake, floods, cyclone, flash floods, some major landslides and event of draught. These disasters generally cause a high loss of life and property and also lead to displacement of a lot of people from their shelters. Generally these disasters pose a major threat to the developmental projects as well as infrastructure of a particular area. Preparedness against these disasters should be on the top of the priority list.

Minor Natural Disasters:
Cold wave, heavy rains causing disruption in normal life, heat wave, thunderstorms, mud slides, some minor land-slides and low intensity earthquakes can be few cases of minor natural disasters. These disasters do not cause much loss in the terms of human life as well as property. Though, if care is not taken then these can prove to be fatal for human beings. There is generally not much need for disaster preparedness at community level but this kind of disaster requires personal preparedness and awareness against these disasters. For example, there can’t t be disaster preparedness for heat-wave or cold wave at community level; it is our own responsibility to take care of ourselves in the event of severe cold and heat.

Man-made Disasters:
These are the disaster generally taking place due to human activities and human negligence and can lead to a lot of destruction in the terms of life and property. At times these are really fatal and sometimes these could be minor event of emergency and can be handled at personal level. At most of the times these take place due to human negligence and hence are unpredictable most of the times, however the events of wars, attacks etc., are predictable disasters. The loss taking place due to these disasters depends upon the intensity of these disasters. These can be classified as:

Major Man-made Disaster:
Some major man-made disasters may include the events of forest-fires, event of wars, nuclear attack, major fires, industrial accidents as well as the event of building collapsing or accidents at construction sites causing a lot of loss and damage. Generally the events leading from human negligence such as industrial accidents, events of fires and construction accidents are unpredictable and cause a major loss in the terms of life and infrastructure. Some major events of industrial fires have been reported in past years that have led to death of a lot of workers and reported a huge loss of material and machinery. It is advised to have an emergency preparedness for evacuation in the events of an emergency and also industrial units should be vigilant and install all the safety gears as well equipment such as fire extinguishers and emergency alarms in the plant.

Minor Man-made Disasters:
Some events of train or road accidents, minor household fire, food poisoning, minor industrial accidents, events of looting, terrorist attacks or event of fire at shops etc., resulting mostly out of personal negligence is termed as minor man-made accidents. These do not lead to a high loss of life though loss of property may be evident in such cases. Personal awareness and caution can help you avert such incidents as well as to escape unhurt in case of such disasters. Hence it is advised to be cautious and vigilant to avoid such incidents.

Mitigation:
Mitigation can be defined as the effort to reduce loss of life and property in the event of a disaster by lessening the impact of disasters. Mitigation is taking action now before the next disaster to reduce human and financial consequences later. Mitigation involves analyzing risk, reducing risk, insuring against risk. Personal mitigation is a key to national preparedness. Individuals and families train to avoid unnecessary risks. This includes an assessment of possible risks to personal/family health and to personal property. Effective mitigation at the time of disaster requires that we all understand local risks, address the hard choices, and invest in long-term community well-being. Without mitigation actions, we jeopardize our safety, financial security, and self-reliance. For effective mitigation, co-ordination, planning and mock activities are very important. Disasters can happen at anytime and anyplace; their human and financial consequences are hard to predict, preparedness is the only solution.

Rescue:
Disaster can strike any place at any time. The response phase of an emergency may commence with search and rescue but in all cases the focus will quickly turn to fulfilling the basic humanitarian needs of the affected population. The assistance may be provided by national or international agencies and organizations but it is the role of local bodies to act as soon as possible. Effective coordination of disaster assistance is often crucial, particularly when many organizations respond and local emergency management agency capacity has been exceeded by the demand or diminished by the disaster itself. Rescue operation involves providing medication to those hurt and taking people out of the affected area and debris in the events of earthquake and floods etc. There are various rescue teams at national and state level which come into action as soon as disaster strikes. But it is also better if local authorities are also trained as they have best knowledge about the geographical location and other local conditions.

Relief:
This is a coordinated multi-agency response to reduce the impact of a disaster and its long-term results. Relief operation starts as soon as disaster strikes and main emphasis is laid on providing injured with medication and providing food as well as clean drinking water to the people. Relief activities include rescue, relocation, providing food and water, preventing disease and disability, repairing vital services such as telecommunications and transport, providing temporary shelter and emergency health care. It is very important to provide relief operation as soon as possible to minimize the number of causalities and to provide relief for injured. The relief workers are trained in basic first aid and medication and are also given training on maintaining co-ordination even in the event of crisis. The relief operation is best supported only when carried out as a team work and all the members of team should co-ordinate well with each other and also support one another without any discrepancy.

Rehabilitation:
As soon as disaster strikes the first thing that comes to mind is relief and rescue operations. Once emergency needs have been met and the initial crisis is over, the people affected and the communities that support them are still vulnerable and it is time to start rehabilitation activities. Rehabilitation activities include rebuilding infrastructure, health care and other basic necessities. These should blend with development activities, such as building human resources for health and developing policies and practices to avoid similar situations in future. The immediate goal of the rehabilitation phase is to bring the affected area back to some degree of normalcy and to get back to normal situation as soon as possible. During reconstruction it is recommended to consider the location or construction material of the property and it should not be hurried rather reconstruction should be done properly and effectively.

Importance of Disaster Management
Disasters are events that have a huge impact on humans and the environment. Disasters are inevitable, we cannot do anything to prevent these but disaster preparedness is only in our hand. Disasters management requires government intervention and a proper planning as well as funding. It is not necessary that these disasters are always unpredictable. Floods take place in valleys and flood plains, droughts in areas with unstable and low rainfall, and oil spills happen in shipping lanes. This predictability provides opportunities to plan for, prevent and to lessen the impact of disasters. Disasters are inevitable although we do not always know when and where they will happen. But their worst effects can be partially or completely prevented by preparation, early warning, and swift, decisive responses.

A big aspect of disaster management is preparedness.

Email ThisBlogThis!Share to TwitterShare to FacebookShare to Pinterest
Labels: Safety